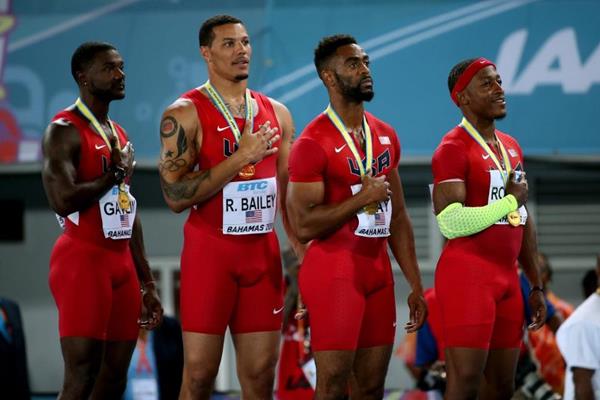 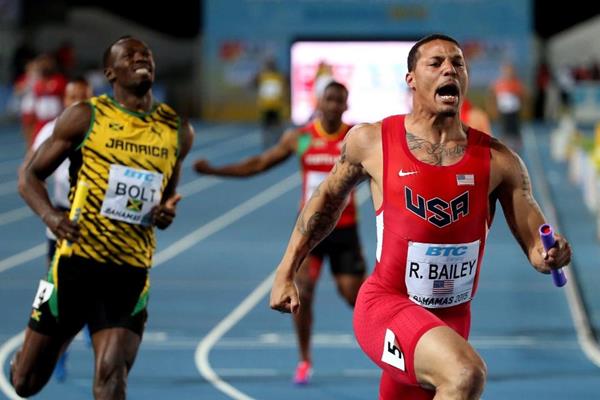 It was the equal-seventh fastest performance in history and a time only other US and Jamaican teams have ever beaten.

Jamaica was left trailing in the wake of the US runners from midway down the back straight and the 2014 World Relays winners were left to settle for second on this occasion in 37.68, also inside the previous competition record.

He remains a polarising figure in the sport but Justin Gatlin has to be given credit for delivering the win with a blistering second leg, pulling away from Jamaica’s Kemar Bailey-Cole almost immediately after the first exchange and then putting a huge margin between himself and the rest of the field.

Tyson Gay consolidated the US lead around the bend and handed over several metres in front to Ryan Bailey.

Even for a sprinter of the stunning talent of Usain Bolt, this was too big a margin to make up and though he reduced the deficit by a metre or so, in the end the reigning world and Olympic champion in the 100m and 200m was a minor player in this drama.

Almost unnoticed, Japan showed off their slick baton passing skills, after being given a great start by their lead-off runner Kazuma Oseto, and came through for a slightly unexpected bronze medal in 38.20.

However, all eight finalist went away with a prize from Nassau, automatic qualification for this event to the Rio 2016 Olympic Games.

The USA had shown that they would be the team to beat when they won their heat time in 37.87, despite a slightly ragged handover from Gay to Bailey.

By contrast, Jamaica won their heat in what for them was a relatively modest 38.07, with Bolt easing down over the final 10 metres on the anchor leg.

Great Britain, third in 2014, made a surprise departure in a rather loaded second heat, with the first two changeovers being far from perfect, and despite world and European indoor 60m champion Richard Kilty making up ground on the last leg.

They finished fourth but didn’t progress to the main final.

They got a small amount of consolation by winning the B-final, with some poor changeovers in evidence once again, but Kilty ran strongly on the final leg to bring them home in front in 38.67, just edging again Barbados’ Mario Burke over the final 10 metres, the latter anchoring the Caribbean island to a national record of 38.70.