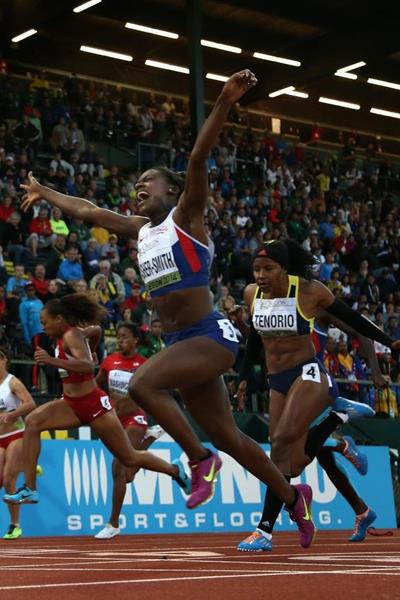 Asher-Smith, running in lane three, had the third-best reaction to the gun but got out of the blocks in a hurry and was in front after 10 metres. At the halfway point, there was daylight between the Briton and her rivals and no doubt who was going to take the gold medal.

“I was just thinking about running as fast as I could to get to the line. I’m so happy, I can’t believe that I’m world junior champion, so many great people have done it before and it’s really humbling to be among them,” reflected Asher-Smith.

“I was ecstatic; I don’t normally celebrate but I just threw my arms in the air and I’m completely over the moon. I’ve worked really hard for it for such a long time and to be able to fulfill what I really wanted to do is amazing. I think my start and drive phase wasn’t as good as earlier in the competition but this was a final and my aim was just to get to the line first, so I’m not too fussed about that! I could have ran a better race I think but I’m happy that I crossed the line first.”

Silver went to Ecuador’s Angela Tenorio in 11.39, with USA’s 16-year-old Kaylin Whitney, who will still be eligible to compete at the 2016 IAAF World Junior Championships, taking bronze in 11.45.

Tenorio, to her right, came on strong in the second half but couldn’t catch the Asher-Smith freight train while Whitney, out in lane eight, was doing her best to catch Tenorio.

With a -1.0m/s headwind, the times didn’t approach Whitney’s 2014 list-leading time of 11.10, but the 0.16 gap between the gold and silver medallists was the second-biggest winning margin in World Juniors history.

Parker Morse for the IAA