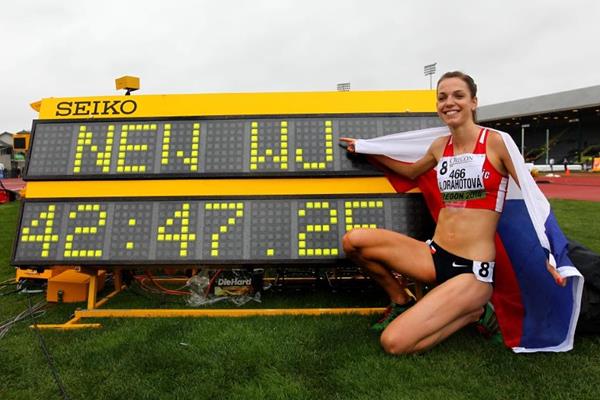 Czech Republic’s Anezka Drahotova produced the first world junior record* of the IAAF World Junior Championships, Oregon 2014 by taking the 10,000m race walk with a time of 42:47.25 to smash the former mark of 42:59.48, set by Russia’s Yelena Lashmanova in 2011.

Sixth in Barcelona 2012, the European junior champion set a fast pace from the start and only Russian Oxana Golyatkina was able to join her.

She dropped the Russian before the fourth kilometre and maintained a world junior record pace throughout the race.

Golyatkina was disqualified shortly after the fourth kilometre and left her countrywoman Olga Shargina and China’s Wang Na to fight for the minor medals. This duo was joined by China’s Ni Yuanyuan and Spain’s Laura Garcia Caro shortly after the halfway mark.

The two Chinese and Shargina dropped the Spaniard with four laps to go and the chase group shrank to Wang and Shargina with 1200m remaining, as Drahotova kept on cranking out laps which made it inevitable that she would take a decent amount of time off the world junior record as long as her technique remained stable.

Shargina made a decisive move with 600 metres to go and crossed the line in second place, only to sadly learn she had been disqualified. She had just embarked on her lap of honour but dissolved into tears.

An accomplished cyclist and mountain runner, Drahotova became the third Czech athlete to win a world junior title, all women, and the first one in 10 years.