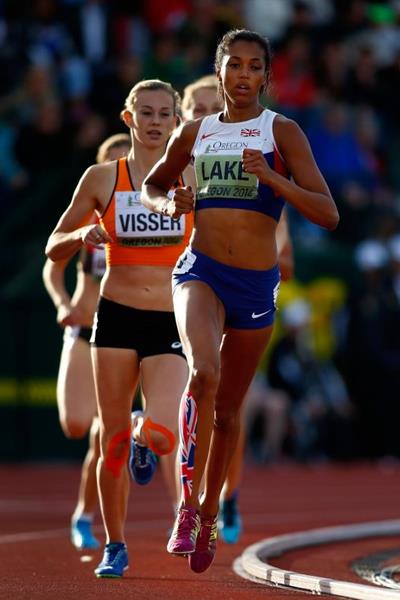 Morgan Lake added her own page to the book of British success in the heptathlon when she secured the world junior title with 6148 points, the highest ever score by a youth athlete in a heptathlon with senior implements as the prodigious Briton is still only 17.

The win more than makes up for events of 12 months ago when Lake led handsomely after the first day of the IAAF World Youth Championships in Donetsk only to have a disaster in the long jump.

“It was an absolutely amazing experience and the crowd were amazing. It’s a nice little stadium so you can hear everyone. Day one and day two were both solid and I was delighted to come away with the gold medal,” she added.

Lake finished the seventh and last event in Eugene, the 800m, in a personal best of 2:21.06 to earn 809 points. More importantly, she came home ahead of her rival Yorgelis Rodriguez, thus denying the Cuban a second consecutive world junior title.

Rodriguez’s final score was 6006, higher than her winning total two years ago in Barcelona, but she had to settle for the silver medal on this occasion.

The Cuban took the lead early in the 800m, splitting 1:07.27 at 400m, but Lake led the pursuit with the Netherlands’ Nadine Visser on her shoulder, both anxious to keep Rodriguez from pulling away.

Lake took the lead with 200 metres remaining and surged away from the flagging Rodriguez before slowing dramatically on the homestretch from 70 metres out, eventually yielding the heat win to Germany’s Louisa Grauvogel, who finished in 2:20.18. (Grauvogel took fifth place overall.)

The best mark in the 800m was achieved by Verener Prenier of Austria, who ran 2:14.46 in the second of three heats.