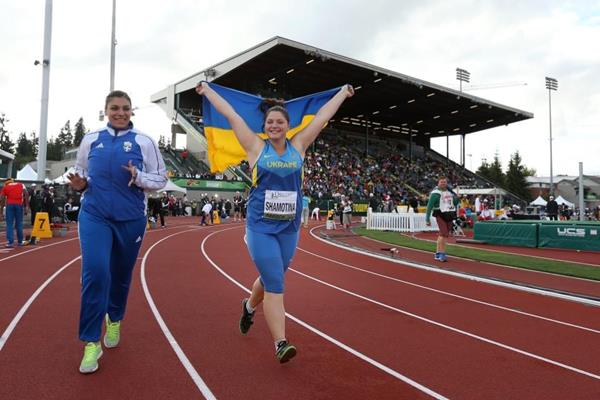 Alyona Shamotina won the women’s hammer throw title with a 66.05m effort in the fifth round.

Shamotina took the lead in the first round with a 65.44m effort and could have stopped there, as that mark was only bettered by herself. She was congratulated immediately after the competition by IAAF Vice President Sergei Bubka, who watched from the sidelines throughout the competition.

Hungary’s world youth champion Reka Gyuratz, similarly, stood in second place after the first round when she threw 64.68m and held that position to the end.

Unlike Shamotina, Gyuratz was unable to improve on her starting throw in later rounds, but her first-round throw was enough to keep silver.

Bronze was notably more volatile, with three different throwers occupying third position over the course of the competition.

In the end, it was Greece’s Iliana Korosidou who took the spot in the sixth round with a 63.67m effort.

Although the three medallists were all about two metres adrift of their personal bests, their finishing order was a reflection of their position on the 2014 world junior lists.