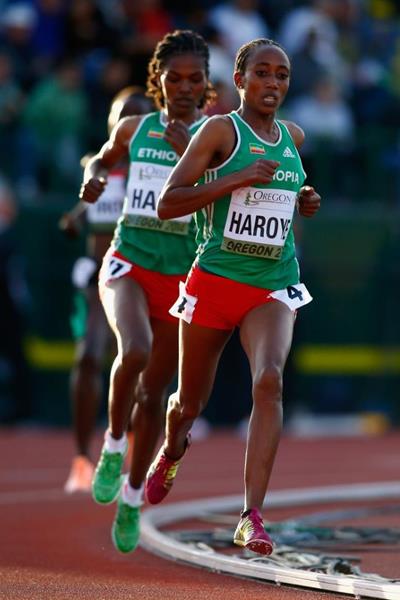 Alemitu Haroye continued Ethiopia’s successful tradition in distance running by winning the 5000m title with a time of 15:10.08, the seventh victory for Ethiopian runners in 10 editions of the event which came on to the championships programme in 1996.

Haroye led a one-two for her country and outsprinted her team-mate Alemitu Hawi in the final stretch to finish barely two seconds outside the championship record, held by their compatriot Genzebe Dibaba who ran 15:08.06 in 2010.

Hawi was rewarded with the silver in 15:10.46, a massive personal best by 25 seconds. Kenya’s world junior cross-country silver medallist Agnes Tirop had to settle for the bronze in 15:43.12, coming home a distant third to repeat her position from two years ago in Barcelona.

The Japanese duo of Fuyuka Kimura and Maki Izumida took the lead from the start, but it was short-lived stint at the front as they were caught up by five African women less than four minutes into the race.

Haroye and Hawi then upped the pace in the third kilometre, covered in 2:52.88, the fastest 1000m in the race, to build an unsurmountable lead over Tirop.

With three laps to go, the only question was which of the two Ethiopian runners would win, a duel for glory which was only decided a few metres from the line.

The fastest junior in the world this year, Haroye ran the third fastest time in the history of the championships to claim her first global title; her best international performance before her arrival in Eugene being when she finished one place behind Tirop in Bydgoszcz.