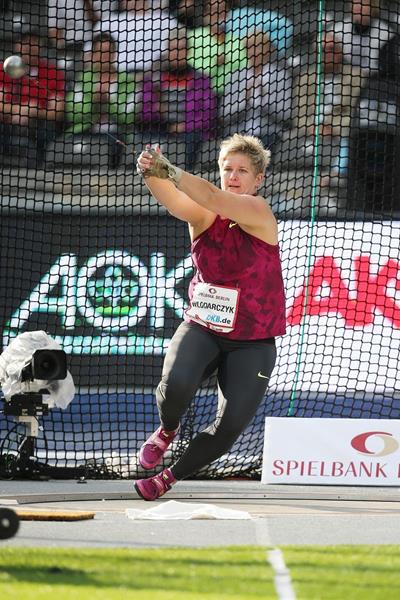 The ISTAF Berlin meeting, part of the 2014 IAAF World Challenge, promised big throws, and it delivered. Unfortunately, for the home crowd, the best throw of the day saw Poland’s Anita Wlodarczyk deprive local star Betty Heidler of her hammer world record* with a huge effort of 79.58m on Sunday (31).The European champion, who in 2009 had set a previous world record of 77.96m at the IAAF World Championships which were also held in Berlin’s famous Olympic stadium, led from the outset.

She opened her series with 75.29m before unleashing her world record throw in the second round, adding 16 centimetres to the mark set by Germany’s Betty Heidler in 2011.

Any one of her attempts would have been enough to win, as Heidler finished second with 75.20m. The contest was also part of the 2014 IAAF Hammer Throw Challenge.

“It feels great to throw a world record. A hammer thrower getting a standing ovation, that’s crazy,” laughed Wlodarczyk after deservedly taking the plaudits from the 50,000 crowd. “I would have liked to throw 80 metres, I had it targeted today and I had a good feeling beforehand. I know I am capable of it.”

However, it was certainly not all doom and gloom for the German throwers, as poster boy Robert Harting put on a stellar performance for his home crowd to take his fifth consecutive ISTAF discus victory.

The 29-year-old led the competition from the start and was crowned winner with a 68.21m performance, just 26cm short of his season’s best and a distance only he and one other man have beaten this year.

“It’s normally difficult to find form after your season’s highlight,” said the recently crowned European champion. “The atmosphere was superb, so it felt like the easiest competition I’ve had all season.”

Lithuania’s Virgilijus Alekna was sent off into retirement as the loudspeakers of Berlin’s iconic Olympic stadium played ‘Time to Say Goodbye’ for the double former world and Olympic champion, who ended his professional career with a 61.84m throw.

With the support of the home crowd, it was just as easy for David Storl as it was for Harting to continue his fine form in the men’s shot put.

With a 21.41m second-round throw, he finished ahead of USA’s Ryan Whiting, and only missed out on the meeting record by 21 centimetres. After several injury struggles this season, Storl will now undergo knee surgery on 18 September in order to help him defend his world title next summer.

Despite being the odds-on favourite, it was only a close victory for fellow European champion Christina Schwanitz.

Everything happened in the sixth and final round of the women’s shot as five out of the eight throwers achieved their best results. Schwanitz edged out Yevgenia Kolodko 19.53m to 19.43m, which was a season’s best for the Russian.

There was also some good jumping as Poland’s former world champion and 2014 European silver medallist Pawel Wojciechowski took the men’s pole vault victory with a season’s best of 5.80m, while the Netherlands’ world silver medallist Ignisious Gaisah won the long jump with 8.13m.

The men’s 800m was a close affair on the finish line as personal and season’s bests tumbled.

Poland’s Adam Kszczot led the race going into the home straight before Algeria’s Olympic 1500m champion Taoufik Makhloufi soared past him. It was, however, Ethiopia’s world champion Mohammed Aman who stole victory on the line in 1:43.52, 0.01 ahead of Makhloufi who got a personal best.

The women’s 100m was equally close as Jamaica’s Kerron Stewart and USA’s Joanna Atkins could only be separated with the help of the photo finish, with Stewart taking a narrow victory of 11.25 over second-placed Atkins’ 11.26.

In the men’s 400m, it was Botswana’s Isaac Makwala and Britain’s Martyn Rooney who were battling it out right to the end.

Tiffany Porter had all the reason to celebrate in the women’s 100m hurdles. Coming out of the blocks with a strong start, world champion Brianna Rollins caught up with her, but the Briton managed to fight back convincingly to take the victory in 12.64.

In the men’s 110m hurdles, it was a Cuban one-two, as Orlando Ortega put on a stellar performance of 13.08 to leave the rest of the field more than two tenths behind him.

Dayron Robles came second, while meeting and world record-holder Aries Merritt, who has been struggling with injury the past two seasons, came fifth.

Trinidad and Tobago’s Richard Thompson pipped Dentarius Locke on the line to take the 100m victory in 10.15.

In the men’s 5000m, Kenyan pair Augustine Choge and John Kipkoech initially looked good for the first two places as they entered the home straight, only for USA’s Bernard Lagat to come along and split them up.

Bahrain’s Ruth Jebet ran a fine race in the 3000m steeplechase with a convincing victory of 9:26.94.

European champion and national hero Antje Moldner-Schmidt finished fifth in 9:34.49, but was happy to have finished the season with her second-fastest time of the year.

Michelle Sammet for the IAAF

*subject to the usual ratification procedures