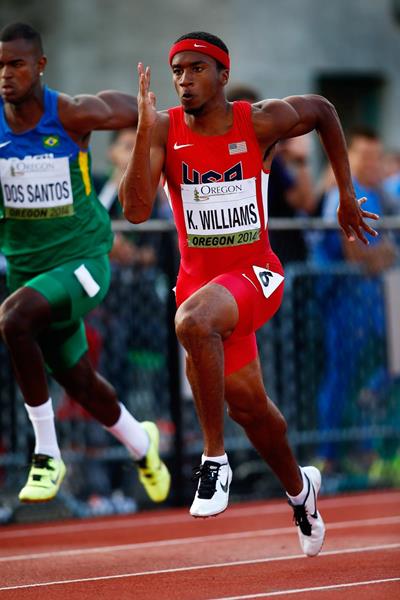 Kendal Williams of the host USA ran 10.21 to win the men’s 100m final at the end of the second day of competition at the IAAF World Junior Championships, Oregon 2014. Williams led a US 1-2 sweep, as team-mate Trayvon Bromell – the world junior record holder at 9.97* earlier this season – took second in 10.28.

Despite Bromell’s suggestions in a pre-meeting press conference that his record was in jeopardy, cool conditions and a light headwind made a record-quality run unlikely.

Williams got out moderately well, slightly behind Bromell who had the best start. Williams didn’t stay behind Bromell long, beginning to draw away from the pack almost immediately and building his lead throughout the race. Of the eight starters, only Williams ran a PB; his previous best was 10.23.

“I was pretty confident. The main part was staying patient,” said Williams. “When I stood up and was right next to Trayvon, it was crazy. It’s the best race I’ve had in my life. Execution was priority number one. Number two was mentally staying in the race. I had to focus on what I had to do, not on anyone else.

“I’ve been waiting all year for my time to shine, and it finally came tonight.”

Bromell was gracious in defeat. “We got two medals for the USA and two medals coming back to Florida,” he said. “Kendal had a great race and executed well. People back home are going to be going crazy.

“I saw Kendal right beside me when I came up, and I saw the whole race. He had great knee lift.”

Bronze went to Japan’s Yoshihide Kiryu in 10.34, Japan’s first ever junior medal in the men’s 100m. Kiryu had the second-fastest PB in the field at 10.01.