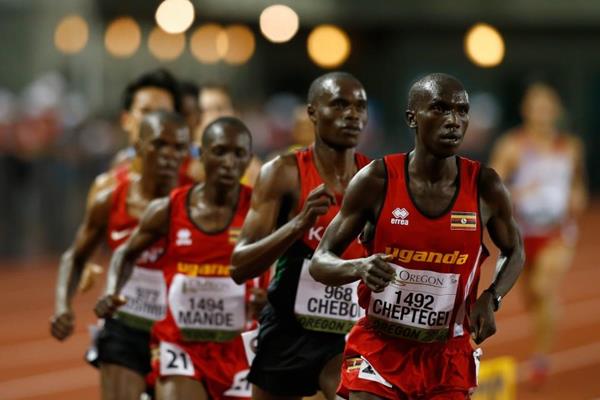 Cheptegei was part of the chase pack which overtook early leaders Keisuke Nakatani and Hazuma Hattori, both of Japan, and held off strong challenges from Kenyan duo Elvis Cheboi and Nicholas Kosimbei for the victory with a 59.6 closing lap.

Cheboi came home second after being unable to respond to Cheptegei’s final move with 200 metres to go, crossing the line in 28:35.20, while Kosimbei was third in 28:38.68.

Nakatani and Hattori made the pace early, leading through the first 15 laps. The former took over the pace after a lap and practically sprinted to reach 1000m in 2:55.87.

Hattori seemed content to let Nakatani set the pace, although Nakatani slowed several times to keep Hattori in contact. The pace was steady, each kilometre split within two seconds, and well within the capabilities of much of the field.

Seeded fifth and sixth coming in to the race, Nakatani and Hattori were too fast to ignore completely, and the rest of the pack, with Cheboi in charge, were careful not to let them get too far away.

After halfway, reached in 14:35.27 by Nakatani, Cheboi led a concerted drive by the chase pack to reel them in and just before 7000m the face of the race changed thanks to the surging, pack-thinning tactics of the East Africans.

When the leading group thinned down to five, it consisted of two Kenyans, two Ugandans (Cheptegei and Abdallah Mande, who eventually finished fifth) and an Eritrean, Afewerki Berhane.

Berhane was the first off the back, then Mande, leaving three men to contest three medals.

Cheptegei took over on the backstretch and from that point all the blue suede spikes in the world weren’t going to help Elvis Cheboi as Cheptegei sailed to the win.

Cheptegei was clearly proud of his achievement. “I’m so very happy and elated. My family in Uganda is very happy.”

He added that the early breakaway by Nakatani and Hattori didn’t worry him. “Starting slow and finishing fast is how I usually run. I didn’t give up. I knew things would change during the race.”

Kosimbei, speaking for the Kenyans, was less satisfied with the outcome. “It was a hard race, especially the last two laps. We were planning to run together with Elvis, and we were sticking to our plan.”

Cheboi’s Presley namesake wasn’t the only musical connection of the night, as the race was accompanied by the debut of an original composition by a University of Oregon composer, “Music for Ten Thousand Meters”.

Played by a brass and percussion ensemble on the infield, the piece incorporated the rhythmic clapping of the Hayward Field crowd, and rose and fell in intensity as the leaders circled the track. “I liked the music,” admitted Kosimbei.

Missing from the race was Ethiopia’s Tsegaye Mekonnen, a sub-2:05 marathoner and holder of the world junior best for the classic distance who had been considered among the favourites but who didn’t make it to the start line.