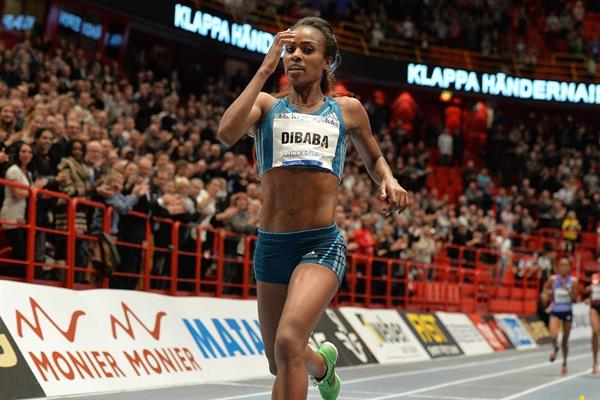 A year ago, Genzebe Dibaba demolished the 3000m world Indoor record at the XL-Galan in the Ericsson Globe Arena in Stockholm. When she returned this Thursday evening (19) she delivered the best kind of deja-vu experience for almost 10,000 spectators at the penultimate IAAF Indoor Permit meeting of the winter.

Despite having pace making help only for the first two kilometres in the 5000m, Dibaba was still capable of running the third world indoor record* of her career when she clocked a stunning 14:18.86 for 25 laps of an indoor track

She took more than five seconds off the previous mark of 14:24:37 set by her compatriot Meseret Defar on the same track in 2009.

Just like 12 months ago, Dibaba was quickly on world record schedule and gradually distanced herself from the intermediate times in Defar’s world record race.

More than a minute in arrears, Dibaba’s fellow Ethiopian Birtukan Fente was a distant second in 15:22.56.

The 10th world record performance in the arena was, of course, the main highlight of the evening but there were four more world-leading marks. 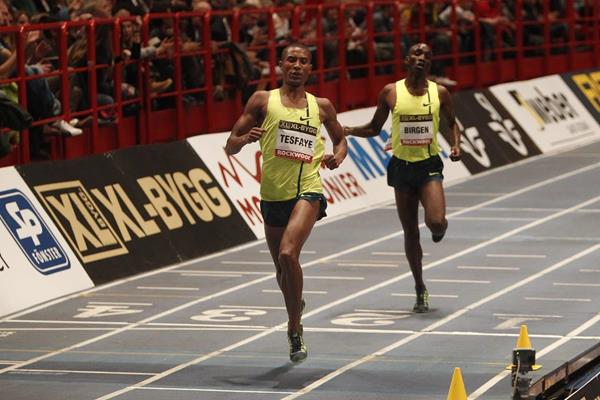 In the women’s 1500m, Sifan Hassan pushed hard from halfway and was obviously aiming for the first sub-four-minute time of this year.

Tesfaye was pushed hard to the line by Kenya’s Bethwell Birgen, who clocked 3:34.62 for second place.

The men’s 800m produced an almost total rewriting of the top end of the 2015 world list with the top six in the race producing the six fastest times of this winter.

Qatar’s Musaeb Balla stuck to the pacemaker right from the start and didn’t falter all the way to the line. Although Kszczot and Lewandowski finished fast, they didn’t quite manage to haul in Balla, who won in 1:45.48 with the Polish pair second and third with 1:45.77 and 1:45.78 respectively.

Another unexpected world-leading mark came in the women’s long jump where Canada’s Christabel Nettey opened with a 6.81m personal best and then reached a national record of 6.99m in the third round, surpassing the national outdoor mark too.

Nettey improved her overall best by no less than 21 centimetres after choosing to pass her last three attempts.

When it came to surprises though, the biggest one was provided before the main programme of the evening got under way when the completely unheralded Qatari teenager Abadalleleh Haroun stormed to an Asian indoor record of 45.39 as the winner of the 400m B-final.

World indoor champion Pavel Maslak from the Czech Republic was almost a full second slower when taking the A-final in 46.38.

Cuba’s Orlando Ortega underlined his current world-leading position in the 60m hurdles with his third victory in a week, leading from start to finish to win in 7.52 from Dayron Robles and David Oliver, who were second and third in 7.56 and 7.66 respectively.

In the women’s high jump, experience triumphed as Spain’s Ruth Beitia was the only one to clear 1.93m. She also had one good attempt at 1.98m so the other high jumpers should be warned that the reigning European indoor champion still has to be reckoned with when she defends her title in Prague in two weeks’ time.

The pole vault was rather more competitive with six women still in the competition with the bar at 4.60m, although, in the end, it turned to be a clear-cut win for Greece’s Nikoleta Kyriakopoulou.

She cleared 4.65m on her second attempt and after her two last remaining opponents, 2011 world champion Fabiana Murer and Angelica Bengtsson, were eliminated at 4.70m, Kyriakopoulou asked to have the bar set at a European-leading 4.76m.

This height was four centimetres above her own national indoor record which, incidentally, was set at this meeting last year, but she still made it on her first attempt with daylight between herself and the bar.

The vault probably would have been enough for 4.81m but Kyriakopoulou, sadly, didn’t manage to reproduce that sort of form with any of her three attempts at that height.

The home crowd in Stockholm also got quite something to cheer for.

Local long jump hero Michel Torneus opened his season with 8.07m, which proved to be the best of the evening as no one else managed to go beyond eight metres.

In women’s 200m, Trinidad and Tobago’s Michelle-Lee Ahye won in a meeting record and personal best of 23.37 from home teenage talent and world youth champion Irene Ekelund, who was second in 23.55.

A Lennart Julin for the IAAF