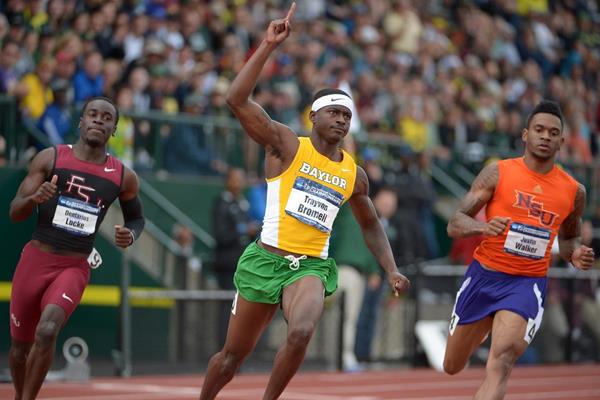 US sprinter Trayvon Bromell fulfilled the predictions that have abounded since the start of the summer that he would be the first junior to run faster than 10 seconds when he clocked a world junior record time of 9.97* to win the 100m at the prestigious US collegiate (NCAA) championships in Eugene on Friday (14).

Bromell, still only 18 and a first-year student at Baylor University, could potentially return to Hayward Field next month as Eugene hosts the 2014 IAAF World Junior Championships between 22-27 July.

This time around, he was helped by a breeze of 1.8m/s on his back and took 0.04 off the former world junior record which he jointly held with Trinidad and Tobago’s Darrel Brown.

It should be noted that USA’s Jeff Demps and Japan’s Yoshihide Kiryu also ran 10.01 but their marks were never ratified as world junior records.

“Going into the race, I was just thinking of mostly getting out of the blocks,” Bromell told reporters.

“I knew I had great competitors who had great block starts. I knew if I could get out before them I could hold them off, because I have a strong finish. That was basically my main goal, just get out the blocks and execute my race.”

Bromell had twice gone under 10 seconds this year prior to Friday’s record run, including a flying 9.92 in Wednesday’s heats, but with wind assistance.

“It’s a blessing,” added Bromell. “It’s a humbling experience, just the fact of getting the record and winning as a freshman (first year student). I really don’t know what to say. I’m real happy I was able to do it.”